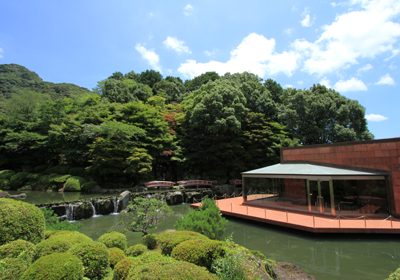 Yoko Museum is located next to Japanese Garden. From the Garden, the Museum can be seen as if it was floating on the pond.
Saga Prefecture is the birthplace of Japanese Ceramics. And in Yoko Museum, we exhibit its original model, Chinese Ceramics wishing that our activity produce fruit in establishing better relationship between China and Japan through cultural communication. Please enjoy and relax while appreciating cultural and artistic products. 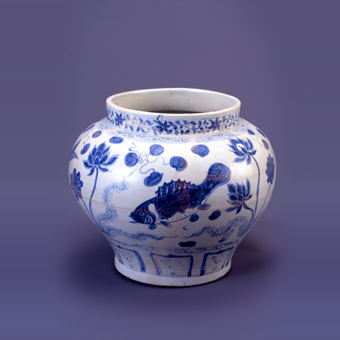 Yuan Dynasty (1271-1368)
The typical decoration form used in this work is called "Blue and white wares"
During the Yuan Dynasty, "Blue and White Porcelain" became popular. This decoration style brought remarkable progress in the history of Ceramics and Porcelain. Its beauty enchanted the entire world and many works were exported.
This work is believed to be created in the early period of Yuan Dynasty. 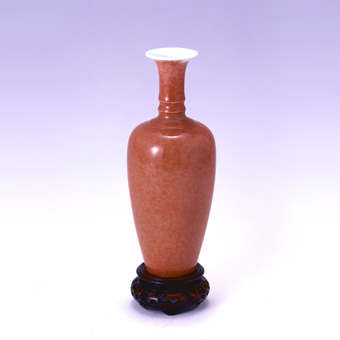 Special kiln existed during the reign of Kangxi Emperor (1705-1723)
"Vase Peach Bloom Glaze", a representative of the ceramics during Qing Dynasty created with the highest technique of that era, is one of the most precious ceramics of formal Qing Dynasty.
This "Vase Peach Bloom Glaze" was created using imperial kiln. In the Court, the queen and ladies admired and cherished works of this kind. They are really graceful and elegant, and have beautiful shape.
Its decorative design was created through spraying application of glaze for several times during combustion.
This work was created from 1705 to 1723 using the Special Kiln and the color came out very well 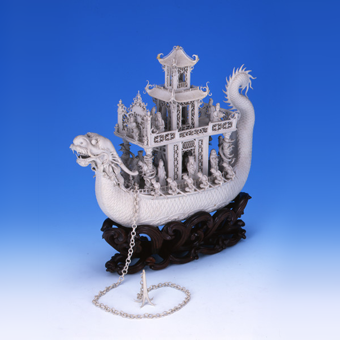 Last years of Qing Dynasty
It is a white ceramic boat fired without applying glaze.
Overlapped Viewing Platforms have magnificent and accurate structure. And each figure possesses vivid facial expression.
This work was created in Jingdezhen, a city historically familiar with Ceramics.

*We don't exhibit items permanently. Please note that some collections may not be displayed at during your visit.
We are happy to answer questions about exhibited items.